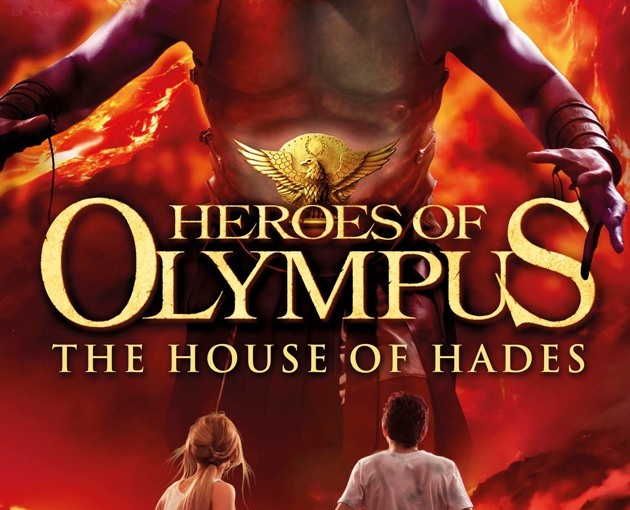 The House of Hades

Let me begin this post by saying that I have not read this book, and the chances that I will read it remain slim.

In fact, that was one of the major reasons why I asked Riya to write about it: No risk of overlap…

Okay, now, we should probably talk about Riya, before we start talking about the book…

Firstly, she is often referred to as TheEditorGirl’s little sister.
Secondly, if you ever refer to her as “little”, she WILL kill you.
And thirdly, she is actually nicer, and smarter, than you would imagine.

And now, after weeks of negotiation, deliberation and procrastination, we finally have a post to share. And to be honest, it could not have come at a better time.

As his raft skimmed over the water, taking him back to the mortal world, he understood a line from the Prophecy better— an oath to keep with a final breath.

He understood how dangerous oaths could be. But Leo didn’t care.

“I’m coming back for you, Calypso,” he said to the night wind. “I swear it on the River Styx.”

Bob ruffled her hair. Smile lines crinkled around his eyes.

“That is good. Until then, my friends, tell the sun and the stars hello for me. And be strong. This may not be the last sacrifice you must make to stop Gaia.”

I’ll keep it short. I swear it on the River Styx.

The House of Hades is the penultimate book of the Heroes of Olympus series, hereafter referred to as HoO, written by Rick Riordan, a guy who claims it’s a children’s book but throws the protagonists in the bottomless pit that is Tartarus. Cruel, right?

For mortals who have no clue what Tartarus is: Tartarus is essentially hell— there, the air is acid, water is misery, and ground is broken glass— so in a nutshell, it is a nuclear blast zone.

Furthermore, I never found it to be an infantile series for if a reader understands the true depth in quotes like these, the reader is anything but a kid.

“But magic is neither good nor evil. It is a tool, like a knife. Is a knife evil? Only if the wielder is evil.”

Though I won’t vouch for my memory, I started reading HoO over two years back. Being an engineering student—and I hope The Writer Guy backs this claim—we become utterly lazy sloths in vacations.

So in the course of my second year vacations, my daily regime, Eat-Sleep-Repeat, was immutably transformed as I stumbled upon an image which sadly I cannot find. Anyway, that image made me read the entire Percy Jackson and Olympians series, followed by the Heroes of Olympus, and eventually the other creations by the author.

Note:
To all my wonderful readers, sorry about the spoilers you are about to witness. I have tried my best to keep it down, though.

The series is based on a prophecy which winds up with either the victory or defeat of Gaea, or Mother Earth.

No matter how calm and peaceful mortals have been portraying Mother Earth, trust me, you want the latter outcome.

In this book, Percy and Annabeth are plunged into Tartarus and are on a quest to find the underworld side of the The Doors of Death, while the other five have to track down the mortal side in the temple House of Hades.

Now you ask why take such pains? Well, Gaea has decided to wake on the Feast of Spes (Day of Hope) and to, ironically enough, destroy all the hope. So if The Doors of Death are not closed, the world we know would disintegrate.

I actually spent a lot of time pondering over which of the books to do, since the space is too dam (sic.) small to critique the entire series. The House of Hades has always been a special book for this book makes the characters undergo through a lot of hardships, yet the characters remain upbeat and, well, sassy. *wink wink*

The other reason is it features the selfless ‘Bob the Titan’. Bob is the Titan Iapetus, who, after losing his memory (long story), is made a janitor in Underworld.

The tone of the book is utterly sarcastic and totally makes the readers roll in the aisles. Being divided among the seven protagonists, the narration of chapters and the narrative voice differs quite significantly;  such an arrangement, according to me, keeps each of the character and their story in the spotlight.

Also, I find it quite interesting that Rick Riordan introduced a gay character; it asserts the fact that sexual orientation is not a choice that can be changed at will.

Well, apart from raising my dating standards incredibly high, this book diluted my pessimism; now, I try staying optimistic while facing the ordeals of life. Also, it made become more grateful for this wonderful life. I wish the readers would give it a try.

Reading this series is like cheering for the German Football Team at the FIFA World Cup—”Romans! Graecus! Die!!!”. Read it anywhere you like—in a bus, or a train, or a lecture—people are going to turn their heads to look for the guffawing maniac that you’ll seem to be.

You probably shouldn’t read it in a lecture, then.

So basically, it seems like a good book, eh? And I have always been fond of this genre in general, and of Greek mythology in particular. It is filled with immoral immortals…

But I still would not read the book, for the simple reason that I am not willing to make the commitment required complete a series more filled than theatres showing Baar Baar Dekho… Yeah, I checked…

The best time for me to start it would be when my kids are old enough to read, and that, despite my best efforts, would probably take a while.

Still, if you do have the time, and the desire, to start a big series, this one is definitely a worthy contender.

Do read it and tell us what you think.

Well, that is all for today.